It never ceases to amaze me to see the ordinary people God used in the Bible. From cover to cover, the Bible has shown us ordinary men and women, perceived as flawed—failures, weak and lowly, but they were able to meet the needs of others, were instruments of His peace, and shared His Good News. God Works in mysterious ways, yes—without doubt—but far more often, God uses ordinary people in the most extraordinary ways! The image to the right is “Salt and Light” by Timothy Mietty

Scripture Reading: 1 Corinthians 1:18-31—Christ, the Power and Wisdom of God

18 For the message about the cross is foolishness to those who are perishing, but to us who are being saved it is the power of God. 19 For it is written, “I will destroy the wisdom of the wise, and the discernment of the discerning I will thwart. 20 Where is the one who is wise? Where is the scholar? Where is the debater of this age? Has not God made foolish the wisdom of the world? 21 For since, in the wisdom of God, the world did not know God through wisdom, God decided, through the foolishness of the proclamation, to save those who believe. 22 For Jews ask for signs and Greeks desire wisdom, 23 but we proclaim Christ crucified, a stumbling block to Jews and foolishness to gentiles, 24 but to those who are the called, both Jews and Greeks, Christ the power of God and the wisdom of God. 25 For God’s foolishness is wiser than human wisdom, and God’s weakness is stronger than human strength.

26 Consider your own call, brothers and sisters: not many of you were wise by human standards, not many were powerful, not many were of noble birth. 27 But God chose what is foolish in the world to shame the wise; God chose what is weak in the world to shame the strong; 28 God chose what is low and despised in the world, things that are not, to abolish things that are, 29 so that no one might boast in the presence of God. 30 In contrast, God is why you are in Christ Jesus, who became for us wisdom from God, and righteousness and sanctification and redemption, 31 in order that, as it is written, “Let the one who boasts, boast in the Lord.”

13 “You are the salt of the earth, but if salt has lost its taste, how can its saltiness be restored? It is no longer good for anything but is thrown out and trampled underfoot. 14 “You are the light of the world. A city built on a hill cannot be hid. 15 People do not light a lamp and put it under the bushel basket; rather, they put it on the lampstand, and it gives light to all in the house. 16 In the same way, let your light shine before others, so that they may see your good works and give glory to your Father in heaven. 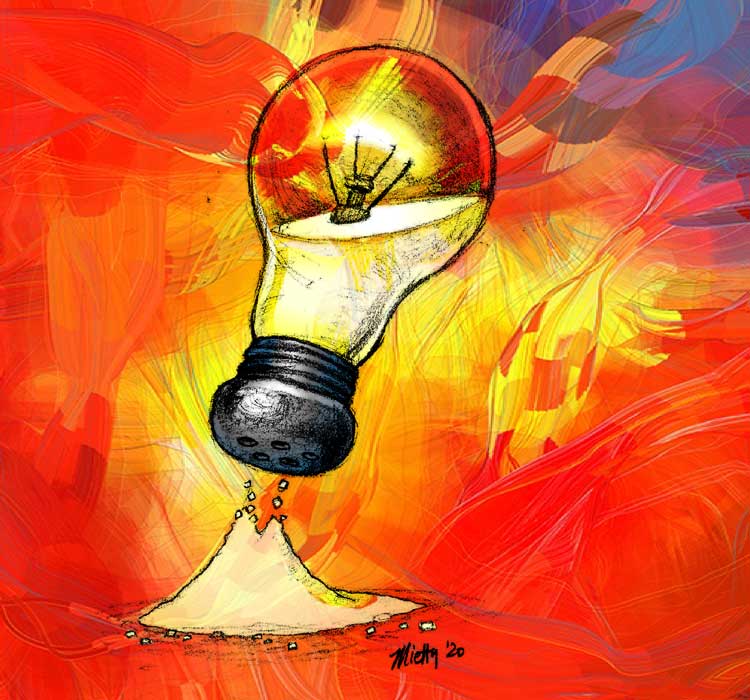