1 The Lord said to Samuel, “How long will you grieve over Saul? I have rejected him from being king over Israel. Fill your horn with oil and set out; I will send you to Jesse the Bethlehemite, for I have provided for myself a king among his sons.”  4 Samuel did what the Lord commanded and came to Bethlehem. The elders of the city came to meet him trembling and said, “Do you come peaceably?” 5 He said, “Peaceably. I have come to sacrifice to the Lord; sanctify yourselves and come with me to the sacrifice.” And he sanctified Jesse and his sons and invited them to the sacrifice. 6 When they came, he looked on Eliab and thought, “Surely his anointed is now before the Lord.” 7 But the Lord said to Samuel, “Do not look on his appearance or on the height of his stature, because I have rejected him, for the Lord does not see as mortals see; they look on the outward appearance, but the Lord looks on the heart.” 8 Then Jesse called Abinadab and made him pass before Samuel. He said, “Neither has the Lord chosen this one.” 9 Then Jesse made Shammah pass by. And he said, “Neither has the Lord chosen this one.” 10 Jesse made seven of his sons pass before Samuel, and Samuel said to Jesse, “The Lord has not chosen any of these.” 11 Samuel said to Jesse, “Are all your sons here?” And he said, “There remains yet the youngest, but he is keeping the sheep.” And Samuel said to Jesse, “Send and bring him, for we will not sit down until he comes here.” 12 He sent and brought him in. Now he was ruddy and had beautiful eyes and was handsome. The Lord said, “Rise and anoint him, for this is the one.”

19 “There was a rich man who was dressed in purple and fine linen and who feasted sumptuously every day. 20 And at his gate lay a poor man named Lazarus, covered with sores, 21 who longed to satisfy his hunger with what fell from the rich man’s table; even the dogs would come and lick his sores. 22 The poor man died and was carried away by the angels to be with Abraham. The rich man also died and was buried. 23 In Hades, where he was being tormented, he lifted up his eyes and saw Abraham far away with Lazarus by his side. 24 He called out, ‘Father Abraham, have mercy on me, and send Lazarus to dip the tip of his finger in water and cool my tongue, for I am in agony in these flames.’ 25 But Abraham said, ‘Child, remember that during your lifetime you received your good things and Lazarus in like manner evil things, but now he is comforted here, and you are in agony. 26 Besides all this, between you and us a great chasm has been fixed, so that those who might want to pass from here to you cannot do so, and no one can cross from there to us.’ 27 He said, ‘Then I beg you, father, to send him to my father’s house— 28 for I have five brothers—that he may warn them, so that they will not also come into this place of torment.’ 29 Abraham replied, ‘They have Moses and the prophets; they should listen to them.’ 30 He said, ‘No, father Abraham, but if someone from the dead goes to them, they will repent.’ 31 He said to him, ‘If they do not listen to Moses and the prophets, neither will they be convinced even if someone rises from the dead.’” 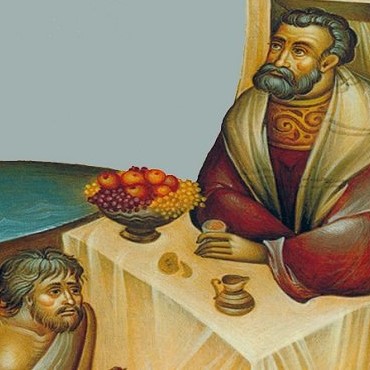