“Do you want to be made well?” The man at the pool of Bethesda never actually answers Jesus’ question. Wrapped up in the logistics of being unable to reach the pool in a timely manner, the man—maybe deliberately, maybe not—doesn’t answer the question. But Jesus doesn’t bother with the details, nor the man’s avoidance, he simply says, “Stand up, take your mat and walk.” Jesus looks beyond the problem, and sees the person—offering healing, wholeness, and new life. He offers the same to us as well. So, do you? Do you want to be made well?”

1 After this there was a festival of the Jews, and Jesus went up to Jerusalem. 2 Now in Jerusalem by the Sheep Gate there is a pool, called in Hebrew Beth-zatha, which has five porticoes. 3 In these lay many ill, blind, lame, and paralyzed people. 5 One man was there who had been ill for thirty-eight years. 6 When Jesus saw him lying there and knew that he had been there a long time, he said to him, “Do you want to be made well?” 7 The ill man answered him, “Sir, I have no one to put me into the pool when the water is stirred up, and while I am making my way someone else steps down ahead of me.” 8 Jesus said to him, “Stand up, take your mat and walk.” 9 At once the man was made well, and he took up his mat and began to walk.

Now that day was a Sabbath. 10 So the Jews said to the man who had been cured, “It is the Sabbath; it is not lawful for you to carry your mat.” 11 But he answered them, “The man who made me well said to me, ‘Take up your mat and walk.’” 12 They asked him, “Who is the man who said to you, ‘Take it up and walk’?” 13 Now the man who had been healed did not know who it was, for Jesus had disappeared in the crowd that was there. 14 Later Jesus found him in the temple and said to him, “See, you have been made well! Do not sin anymore, so that nothing worse happens to you.” 15 The man went away and told the Jews that it was Jesus who had made him well. 16 Therefore the Jews started persecuting Jesus, because he was doing such things on the Sabbath. 17 But Jesus answered them, “My Father is still working, and I also am working.” 18 For this reason the Jews were seeking all the more to kill him, because he was not only breaking the Sabbath but was also calling God his own Father, thereby making himself equal to God. 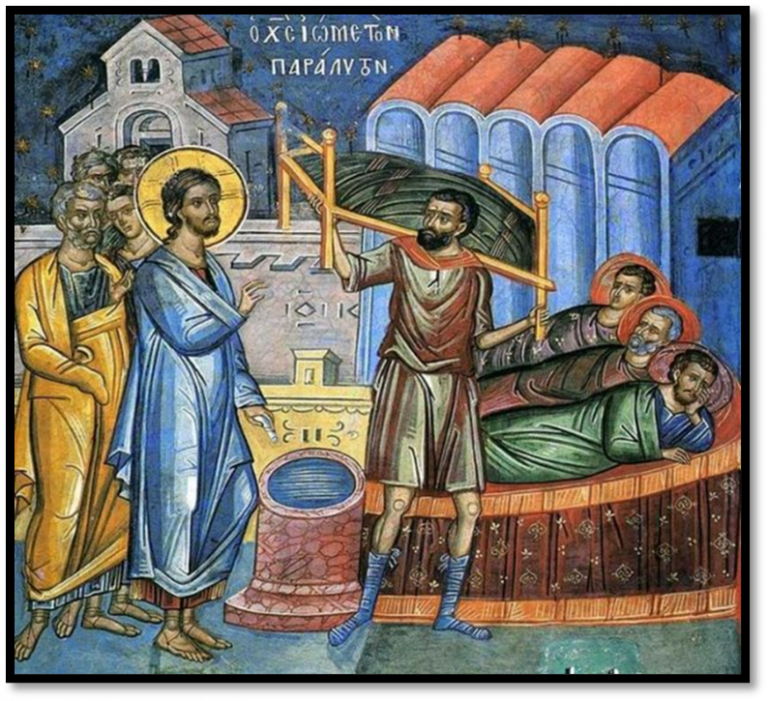