As the old hymn goes, that there’s a wideness in God’s mercy. But I ask you: What about us? How wide is wide?  Is it as wide as a shepherd’s heart; one that risks the lives of ninety-nine sheep in order to find the one who is lost? Is it wide enough to include folks who are different from us, those who don’t look like us, talk or dress like us, whose skin is a different color—folks who’re different, as the eunuch was different? Perhaps, as it’s often been exhibited by the Church, maybe not as wide as we think. The Holy Spirit blows where it wills. Since the moment of Creation it has blown, and it blows today, even in—especially in—the most unexpected people and places. It always will. And with the Spirit’s empowering, what’s impossible for humans, becomes not only possible, but immediate, compelling, and real. In people, places, and situations that might seem God-forsaken, we can often find revelation and blessing.

13 But now in Christ Jesus you who once were far off have been brought near by the blood of Christ. 14 For he is our peace; in his flesh he has made both into one and has broken down the dividing wall, that is, the hostility between us, 15 abolishing the law with its commandments and ordinances, that he might create in himself one new humanity in place of the two, thus making peace, 16 and might reconcile both to God in one body through the cross, thus putting to death that hostility through it. 17 So he came and proclaimed peace to you who were far off and peace to those who were near, 18 for through him both of us have access in one Spirit to the Father. 19 So then, you are no longer strangers and aliens, but you are fellow citizens with the saints and also members of the household of God, 20 built upon the foundation of the apostles and prophets, with Christ Jesus himself as the cornerstone; 21 in him the whole structure is joined together and grows into a holy temple in the Lord, 22 in whom you also are built together spiritually into a dwelling place for God.

1 That day a severe persecution began against the church in Jerusalem, and all except the apostles were scattered throughout the countryside of Judea and Samaria. 4 Now those who were scattered went from place to place proclaiming the word. 5 Philip went down to the city of Samaria and proclaimed the Messiah to them. 6 The crowds with one accord listened eagerly to what was said by Philip, hearing and seeing the signs that he did, 7 for unclean spirits, crying with loud shrieks, came out of many who were possessed, and many others who were paralyzed or lame were cured. 8 So there was great joy in that city.

26 Then an angel of the Lord said to Philip, “Get up and go toward the south to the road that goes down from Jerusalem to Gaza.” (This is a wilderness road.)  27 So he got up and went. Now there was an Ethiopian eunuch, a court official of the Candace, the queen of the Ethiopians, in charge of her entire treasury. He had come to Jerusalem to worship 28 and was returning home; seated in his chariot, he was reading the prophet Isaiah. 29 Then the Spirit said to Philip, “Go over to this chariot and join it.” 30 So Philip ran up to it and heard him reading the prophet Isaiah. He asked, “Do you understand what you are reading?” 31 He replied, “How can I, unless someone guides me?” And he invited Philip to get in and sit beside him. 32 Now the passage of the scripture that he was reading was this: “Like a sheep he was led to the slaughter, and like a lamb silent before its shearer, so he does not open his mouth. 33 In his humiliation justice was denied him. Who can describe his generation? For his life is taken away from the earth.”

34 The eunuch asked Philip, “About whom, may I ask you, does the prophet say this, about himself or about someone else?” 35 Then Philip began to speak, and starting with this scripture he proclaimed to him the good news about Jesus. 36 As they were going along the road, they came to some water, and the eunuch said, “Look, here is water! What is to prevent me from being baptized?” 38 He commanded the chariot to stop, and both of them, Philip and the eunuch, went down into the water, and Philip baptized him. 39 When they came up out of the water, the Spirit of the Lord snatched Philip away; the eunuch saw him no more and went on his way rejoicing. 40 But Philip found himself at Azotus, and as he was passing through the region he proclaimed the good news to all the towns until he came to Caesarea. 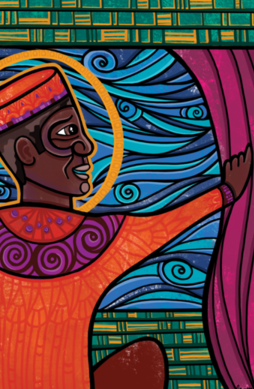