Watching for signs from God are an important part of process of discernment. We’re to be still and know that God is God—that the Lord is God indeed. So we must try to pay attention. Stay alert. What signs of wonder might we have seen? What whispers might we have heard? On the other hand, what might we have missed? What might we have ignored altogether? Either because we’ve stopped listening, refused to listen, or because we thought that God could never have been trying to get our attention? If we truly want to walk with God and become the people that God wants us to be—that God is calling us to be—we have to learn to pay attention and listen.

In a royal rumble for the ages, Elijah, a prophet of the Most High God of Israel, faces of against the prophets of the pagan god Baal. What happens is spectacular and leaves no doubt who the REAL God is!

17 When Ahab saw Elijah, Ahab said to him, “Is it you, you troubler of Israel?” 18 He answered, “I have not troubled Israel; but you have, and your father’s house, because you have forsaken the commandments of the Lord and followed the Baals. 19 Now therefore have all Israel assemble for me at Mount Carmel, with the four hundred fifty prophets of Baal and the four hundred prophets of Asherah, who eat at Jezebel’s table.” 20 So Ahab sent to all the Israelites, and assembled the prophets at Mount Carmel. 21 Elijah then came near to all the people, and said, “How long will you go limping with two different opinions? If the Lord is God, follow him; but if Baal, then follow him.” The people did not answer him a word. 22 Then Elijah said to the people, “I, even I only, am left a prophet of the Lord; but Baal’s prophets number four hundred fifty. 23 Let two bulls be given to us; let them choose one bull for themselves, cut it in pieces, and lay it on the wood, but put no fire to it; I will prepare the other bull and lay it on the wood, but put no fire to it. 24 Then you call on the name of your god and I will call on the name of the Lord; the god who answers by fire is indeed God.” All the people answered, “Well spoken!” 25 Then Elijah said to the prophets of Baal, “Choose for yourselves one bull and prepare it first, for you are many; then call on the name of your god, but put no fire to it.” 26 So they took the bull that was given them, prepared it, and called on the name of Baal from morning until noon, crying, “O Baal, answer us!” But there was no voice, and no answer. They limped about the altar that they had made. 27 At noon Elijah mocked them, saying, “Cry aloud! Surely he is a god; either he is meditating, or he has wandered away, or he is on a journey, or perhaps he is asleep and must be awakened.” 28 Then they cried aloud and, as was their custom, they cut themselves with swords and lances until the blood gushed out over them. 29 As midday passed, they raved on until the time of the offering of the oblation, but there was no voice, no answer, and no response.

30 Then Elijah said to all the people, “Come closer to me”; and all the people came closer to him. First he repaired the altar of the Lord that had been thrown down; 31 Elijah took twelve stones, according to the number of the tribes of the sons of Jacob, to whom the word of the Lord came, saying, “Israel shall be your name”; 32 with the stones he built an altar in the name of the Lord. Then he made a trench around the altar, large enough to contain two measures of seed. 33 Next he put the wood in order, cut the bull in pieces, and laid it on the wood. He said, “Fill four jars with water and pour it on the burnt offering and on the wood.” 34 Then he said, “Do it a second time”; and they did it a second time. Again he said, “Do it a third time”; and they did it a third time, 35 so that the water ran all around the altar, and filled the trench also with water.

36 At the time of the offering of the oblation, the prophet Elijah came near and said, “O Lord, God of Abraham, Isaac, and Israel, let it be known this day that you are God in Israel, that I am your servant, and that I have done all these things at your bidding. 37 Answer me, O Lord, answer me, so that this people may know that you, O Lord, are God, and that you have turned their hearts back.” 38 Then the fire of the Lord fell and consumed the burnt offering, the wood, the stones, and the dust, and even licked up the water that was in the trench. 39 When all the people saw it, they fell on their faces and said, “The Lord indeed is God; the Lord indeed is God.” 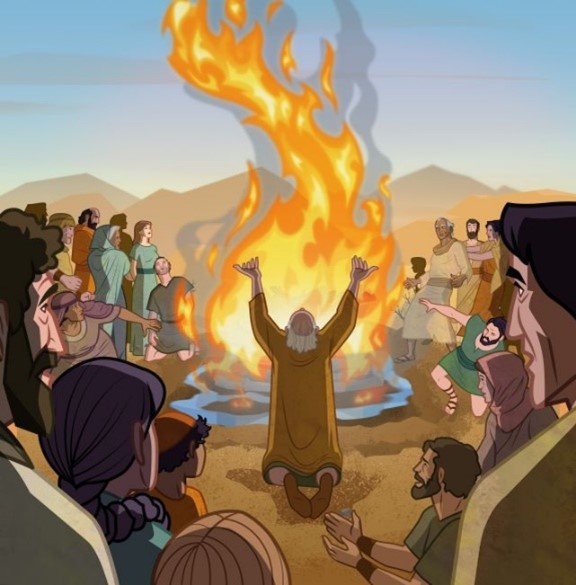