“Hope is the only thing more powerful than fear. A little hope is effective, a lot of hope is dangerous.” That is what the Kingdom of God, to which Jesus compares to a mustard seed, offers. Hope. Dangerous hope. Like the mustard plant that grows from that deceptively tiny seed, we can’t control it or contain it, all we can do is seek it and help it grow.

Our readings today teach us, among other things, that appearances can be deceiving.

34 Then Samuel went to Ramah; and Saul went up to his house in Gibeah of Saul. 35 Samuel did not see Saul again until the day of his death, but Samuel grieved over Saul. And the LORD was sorry that he had made Saul king over Israel. 16 The Lord said to Samuel, “How long will you grieve over Saul? I have rejected him from being king over Israel. Fill your horn with oil and set out; I will send you to Jesse the Bethlehemite, for I have provided for myself a king among his sons.” 2 Samuel said, “How can I go? If Saul hears of it, he will kill me.” And the Lord said, “Take a heifer with you, and say, ‘I have come to sacrifice to the Lord.’ 3 Invite Jesse to the sacrifice, and I will show you what you shall do; and you shall anoint for me the one whom I name to you.” 4 Samuel did what the Lord commanded, and came to Bethlehem. The elders of the city came to meet him trembling, and said, “Do you come peaceably?” 5 He said, “Peaceably; I have come to sacrifice to the Lord; sanctify yourselves and come with me to the sacrifice.” And he sanctified Jesse and his sons and invited them to the sacrifice.

6 When they came, he looked on Eliab and thought, “Surely the Lord’s anointed is now before the Lord.” 7 But the Lord said to Samuel, “Do not look on his appearance or on the height of his stature, because I have rejected him; for the Lord does not see as mortals see; they look on the outward appearance, but the Lord looks on the heart.” 8 Then Jesse called Abinadab, and made him pass before Samuel. He said, “Neither has the Lord chosen this one.” 9 Then Jesse made Shammah pass by. And he said, “Neither has the Lord chosen this one.” 10 Jesse made seven of his sons pass before Samuel, and Samuel said to Jesse, “The Lord has not chosen any of these.”  11 Samuel said to Jesse, “Are all your sons here?” And he said, “There remains yet the youngest, but he is keeping the sheep.” And Samuel said to Jesse, “Send and bring him; for we will not sit down until he comes here.” 12 He sent and brought him in. Now he was ruddy, and had beautiful eyes, and was handsome. The Lord said, “Rise and anoint him; for this is the one.” 13 Then Samuel took the horn of oil, and anointed him in the presence of his brothers; and the spirit of the Lord came mightily upon David from that day forward.

Gospel Reading: Mark 4:26-34—The Parable of the Mustard Seed

26 He also said, “The kingdom of God is as if someone would scatter seed on the  ground, 27 and would sleep and rise night and day, and the seed would sprout and grow, he does not know how. 28 The earth produces of itself, first the stalk, then the head, then the full grain in the head. 29 But when the grain is ripe, at once he goes in with his sickle, because the harvest has come.”

30 He also said, “With what can we compare the kingdom of God, or what parable will we  use for it? 31 It is like a mustard seed, which, when sown upon the ground, is the smallest of all the seeds on earth; 32 yet when it is sown it grows up and becomes the greatest of all shrubs, and puts forth large branches, so that the birds of the air can make nests in its shade.” 33 With many such parables he spoke the word to them, as they were able to hear it; 34 he did not speak to them except in parables, but he explained everything in private to his disciples. 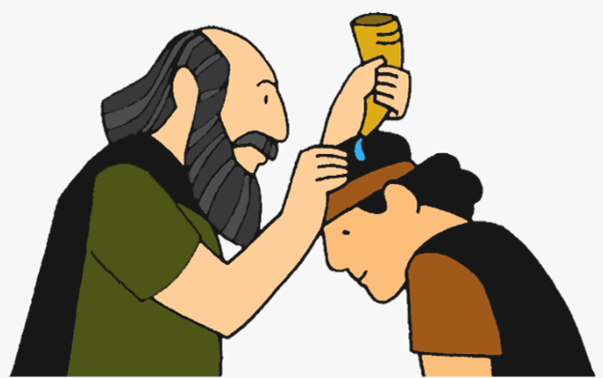