Are we having trouble sleeping? Perhaps it’s time to stop kidding ourselves, others, and—especially—God. Perhaps it’s time to open ourselves up to the possibility that God is calling us, and that God can—indeed—use us. It’s not difficult. Simple? Yes. Easy, no—but they’re the first step toward wholeness and peace, a step towards being the person we’ve been created to be—a person that’s able to make a difference, here in our church, and in our community. “Here I am, Lord. I have heard you calling in the night. I will go Lord, if you lead me. I will hold your people in my heart.”

The illustration on the right is Samuel Called by God, a painting by Marc Chagall

God is greater than any mortal. 13 Why do you contend against him, saying, ‘He will answer none of my words’? 14 For God speaks in one way and in two, though people do not perceive it. 15 In a dream, in a vision of the night, when deep sleep falls on mortals, while they slumber on their beds, 16 then he opens their ears and terrifies them with warnings, 17 that he may turn them aside from their deeds and keep them from pride, 18 to spare their souls from the Pit, their lives from traversing the River.

19 As Samuel grew up, the Lord was with him and let none of his words fall to the ground. 20 And all Israel from Dan to Beer-Sheba knew that Samuel was a trustworthy prophet of the Lord. 21 The Lord continued to appear at Shiloh, for the Lord revealed himself to Samuel at Shiloh by the word of the Lord. 1 And the word of Samuel came to all Israel. 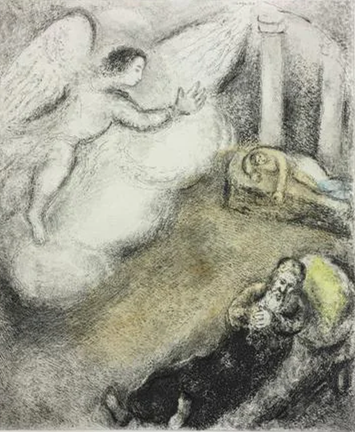