The disciples in today’s gospel reading risked everything to follow Christ. They walked away from jobs and family, from life as they knew it. So have many others throughout history. What about us? Think about it. I mean, things like risk, adventure, danger—these aren’t things we normally associate with faith. But in reality, the explorer and the believer are both walking the same path. The life of faith is a daring adventure. It’s risky business. The way is different for everyone, but brothers and sisters—here’s the thing: It’s here and only here on the precipice—between the comfortable, and the unknown—that faith will truly thrive and deepen. Only here will you discover the truth, the truth that the more you risk, trusting in God, the closer you’ll find yourself to God’s heart, and the safer you’ll become.

First Reading: Isaiah 9:1-4—The Righteous Reign of the Coming King

1 But there will be no gloom for those who were in anguish. In the former time he brought into contempt the land of Zebulun and the land of Naphtali, but in the latter time he will make glorious the way of the sea, the land beyond the Jordan, Galilee of the nations. 2 The people who walked in darkness have seen a great light; those who lived in a land of deep darkness—on them light has shined. 3 You have multiplied exultation; you have increased its joy; they rejoice before you as with joy at the harvest, as people exult when dividing plunder. 4 For the yoke of their burden and the bar across their shoulders, the rod of their oppressor, you have broken as on the day of Midian.

12 Now when Jesus heard that John had been arrested, he withdrew to Galilee. 13 He left Nazareth and made his home in Capernaum by the sea, in the territory of Zebulun and Naphtali, 14 so that what had been spoken through the prophet Isaiah might be fulfilled: 15 “Land of Zebulun, land of Naphtali, on the road by the sea, across the Jordan, Galilee of the gentiles—16 the people who sat in darkness have seen a great light, and for those who sat in the region and shadow of death light has dawned.” 17 From that time Jesus began to proclaim, “Repent, for the kingdom of heaven has come near.”

18 As he walked by the Sea of Galilee, he saw two brothers, Simon, who is called Peter, and Andrew his brother, casting a net into the sea—for they were fishers. 19 And he said to them, “Follow me, and I will make you fishers of people.” 20 Immediately they left their nets and followed him. 21 As he went from there, he saw two other brothers, James son of Zebedee and his brother John, in the boat with their father Zebedee, mending their nets, and he called them. 22 Immediately they left the boat and their father followed him. 23 Jesus went throughout all Galilee, teaching in their synagogues and proclaiming the good news of the kingdom and curing every disease and every sickness among the people. 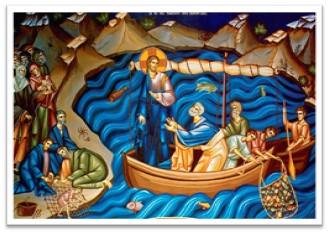