The Oxford Dictionary defines transfiguration as “a transformation; a change of the form or nature of a thing or person into a completely different one, by natural or supernatural means.” So, what happened on that mountain just six days after a conversation about suffering and death? A conversation that began when Jesus asks the disciples, “Who do you say that I am?” The Transfiguration of Jesus seems to be (among other things) a preview of coming attractions—a trailer, if you will—of change that was surely coming. It was about preparing for, and embracing the change, trusting in the One who brings about the change. The One who call us change, and sees us through it; a call to become more; a call to become like Jesus.

First Reading: Exodus 34:29-35—Moses Comes Down from Mt. Sinai
29 Moses came down from Mount Sinai. As he came down from the mountain with the two tablets of the covenant in his hand, Moses did not know that the skin of his face shone because he had been talking with God. 30When Aaron and all the Israelites saw Moses, the skin of his face was shining, and they were afraid to come near him. 31But Moses called to them; and Aaron and all the leaders of the congregation returned to him, and Moses spoke with them. 32 Afterward all the Israelites came near, and he gave them in commandment all that the Lord had spoken with him on Mount Sinai. 33 When Moses had finished speaking with them, he put a veil on his face; 34 but whenever Moses went in before the Lord to speak with him, he would take the veil off, until he came out; and when he came out, and told the Israelites what he had been commanded, 35 the Israelites would see the face of Moses, that the skin of his face was shining; and Moses would put the veil on his face again, until he went in to speak with him.

Gospel Reading: Luke 9:28-36—The Transfiguration
28 Now about eight days after these sayings Jesus took with him Peter and John and James, and went up on the mountain to pray. 29 And while he was praying, the appearance of his face changed, and his clothes became dazzling white. 30 Suddenly they saw two men, Moses and Elijah, talking to him. 31 They appeared in glory and were speaking of his departure, which he was about to accomplish at Jerusalem. 32 Now Peter and his companions were weighed down with sleep; but since they had
stayed awake, they saw his glory and the two men who stood with him. 33 Just as they were leaving him, Peter said to Jesus, “Master, it is good for us to be here; let us make three dwellings, one for you, one for Moses, and one for Elijah”—not knowing what he said. 34 While he was saying this, a cloud came and overshadowed them; and they were terrified as they entered the cloud. 35 Then from the cloud came a voice that said, “This is my Son, my Chosen; listen to him!” 36 When the voice had spoken, Jesus was found alone. And they kept silent and in those days told no one any of the things they had seen. 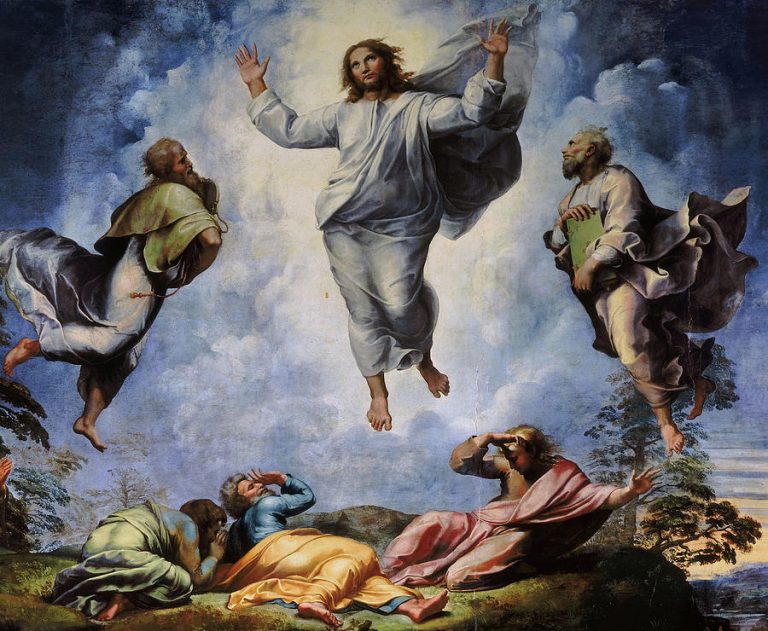