People say that the net full of fish is the miracle of this story, but I don’t know. I think the real miracle of this story is that Simon decided that God was God, and started living that way immediately. Look at what he says right before the miracles begin to happen: “Yet, Lord if you say so….”   My frustration is real, Lord. My pain is real. My emptiness is real. My despair is real. It’s all real, Lord—and yet—you are God and I’m not. That’s when miracles happen: when we decide that God is God.

16 I am now sending for many fishermen, says the Lord, and they shall catch them; and afterward I will send for many hunters, and they shall hunt them from every mountain and every hill, and out of the clefts of the rocks. 17 For my eyes are on all their ways; they are not hidden from my presence, nor is their iniquity concealed from my sight.

1 Once while Jesus was standing beside the lake of Gennesaret, and the crowd was pressing in on him to hear the word of God, 2 he saw two boats there at the shore of the lake; the fishermen had gone out of them and were washing their nets. 3 He got into one of the boats, the one belonging to Simon, and asked him to put out a little way from the shore. Then he sat down and taught the crowds from the boat. 4 When he had finished speaking, he said to Simon, “Put out into the deep water and let down your nets for a catch.” 5 Simon answered, “Master, we have worked all night long but have caught nothing. Yet if you say so, I will let down the nets.”

6 When they had done this, they caught so many fish that their nets were beginning to break. 7 So they signaled their partners in the other boat to come and help them. And they came and filled both boats, so that they began to sink. 8 But when Simon Peter saw it, he fell down at Jesus’ knees, saying, “Go away from me, Lord, for I am a sinful man!” 9 For he and all who were with him were amazed at the catch of fish that they had taken; 10 and so also were James and John, sons of Zebedee, who were partners with Simon. Then Jesus said to Simon, “Do not be afraid; from now on you will be catching people.” 11 When they had brought their boats to shore, they left everything and followed him. 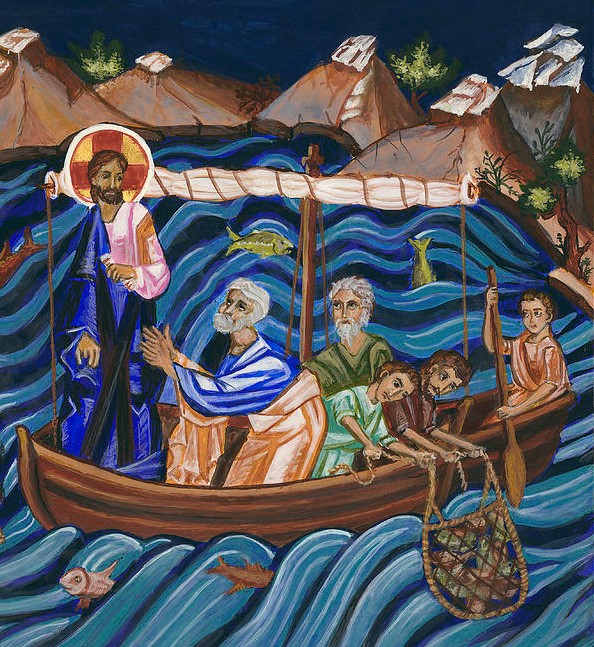