“He is Risen Indeed!”

In the economy of the Christian faith Jesus’ resurrection and ours are the obverse and reverse side of the same gospel coin. He is “the first fruits of those who have died!” Okay, but what does that mean? It means that Jesus is simply the first to be resurrected. His was the prototype for what awaits everyone. In other words, the harvest has only just begun. As God raised Jesus back to life, so will God raise us as well.

19 If for this life only we have hoped in Christ, we are of all people most to be pitied. 20 But  in fact Christ has been raised from the dead, the first fruits of those who have died. 21 For  since death came through a human being, the resurrection of the dead has also come  through a human being; 22 for as all die in Adam, so all will be made alive in Christ. 23But  each in his own order: Christ the first fruits, then at his coming those who belong to Christ.

1 Early on the first day of the week, while it was still dark, Mary Magdalene came to the  tomb and saw that the stone had been removed from the tomb. 2 So she ran and went to  Simon Peter and the other disciple, the one whom Jesus loved, and said to them, “They  have taken the Lord out of the tomb, and we do not know where they have laid him.”

8 Then the other disciple, who reached the tomb first, also went in, and he saw and  believed; 9for as yet they did not understand the scripture, that he must rise from the  dead. 10 Then the disciples returned to their homes. 11 But Mary stood weeping outside the  tomb. As she wept, she bent over to look into the tomb; 12 and she saw two angels in white,  sitting where the body of Jesus had been lying, one at the head and the other at the  feet. 13 They said to her, “Woman, why are you weeping?” She said to them, “They have  taken away my Lord, and I do not know where they have laid him.”

14 When she had said this, she turned around and saw Jesus standing there, but she did not  know that it was Jesus. 15 Jesus said to her, “Woman, why are you weeping? Whom are  you looking for?” Supposing him to be the gardener, she said to him, “Sir, if you have  carried him away, tell me where you have laid him, and I will take him away.” 16 Jesus  said to her, “Mary!” She turned and said to him in Hebrew, “Rabbouni!” (which means  Teacher). 17 Jesus said to her, “Do not hold on to me, because I have not yet ascended to  the Father. But go to my brothers and say to them, ‘I am ascending to my Father and your  Father, to my God and your God.’” 18 Mary Magdalene went and announced to the  disciples, “I have seen the Lord”; and she told them that he had said these things to her. 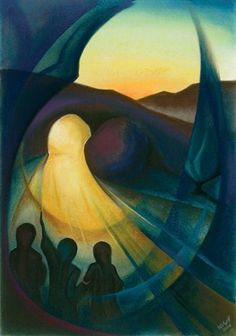