We gather on Palm Sunday to once again tell the story of Jesus’ triumphant entrance into Jerusalem, marking the beginning of Holy Week. So—let us tell the story again because it is our story, and we tell it again in order to proclaim it to the world. We tell it again because this week, in this time—in our time—we keep alive the rumor that there is a God, and that despite the pain we see every day, this God is a God of Love—a God of Hope; that this God is a God who loves, a God that cries with, and cares for everyone. Every single person—every man, every woman, every child—until  Christ comes again in final victory, and we feast at the heavenly banquet. We will tell the story again, not simply because we’re called to do so, but because the world desperately needs to hear it! The story of how truth and justice, love and grace, became flesh, dwelt among us, defeated death, and changed everything. The story of every time we’ve experienced grace, the times we thought our world had ended. The story of how very loved we are. Our story. So, let us rise up, as Jerusalem once did, and let us shout in one, loud voice, “Hosanna!”

1 If then there is any encouragement in Christ, any consolation from love, any sharing in the Spirit, any compassion and sympathy, 2 make my joy complete: be of the same mind, having the same love, being in full accord and of one mind. 3 Do nothing from selfish ambition or conceit, but in humility regard others as better than yourselves. 4 Let each of you look not to your own interests, but to the interests of others. 5 Let the same mind be in you that was in Christ Jesus, 6 who, though he was in the form of God, did not regard equality with God as something to be exploited, 7 but emptied himself, taking the form of a slave, being born in human likeness. And being found in human form, 8 he humbled himself and became obedient to the point of death—even death on a cross. 9 Therefore God also highly exalted him and gave him the name  that is above every name, 10 so that at the name of Jesus every knee should bend, in heaven and on earth and under the earth, 11 and every tongue should confess that Jesus Christ is Lord to the glory of God the Father.

28 After he had said this, he went on ahead, going up to Jerusalem. 29 When he had come near Bethphage and Bethany, at the place called the Mount of Olives, he sent two of the disciples, 30 saying, “Go into the village ahead of you, and as you enter it you will find tied there a colt that has never been ridden. Untie it and bring it here. 31 If anyone asks you, ‘Why are you untying it?’ just say this, ‘The Lord needs it.’” 32 So those who were sent departed and found it as he had told them. 33 As they were untying the colt, its owners asked them, “Why are you untying the colt?” 34 They said, “The Lord needs it.” 35 Then they brought it to Jesus; and after throwing their cloaks on the colt, they set Jesus on it. 36 As he rode along, people kept spreading their cloaks on the road. 37 As he was now approaching the path down from the Mount of Olives, the whole multitude of the disciples began to praise God joyfully with a loud voice for all the deeds of power that they had seen, 38 saying, “Blessed is the king who comes in the name of the Lord! Peace in heaven, and glory in the highest heaven!” 39 Some of the Pharisees in the crowd said to him, “Teacher, order your disciples to stop.” 40 He answered, “I tell you, if these were silent, the stones would shout out.” 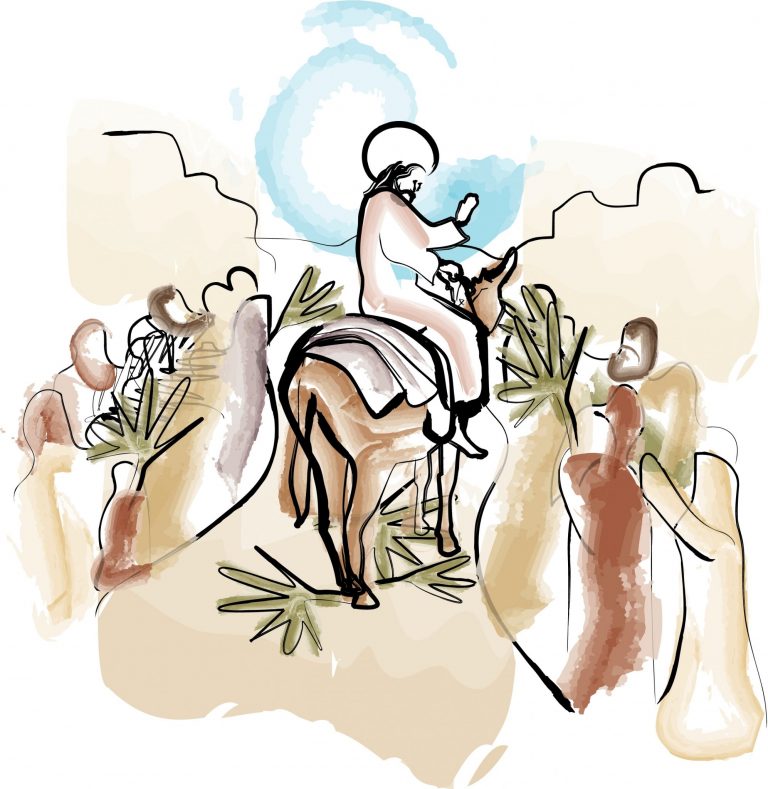